EDITORIAL: Online SAT won’t change as much as you think it will 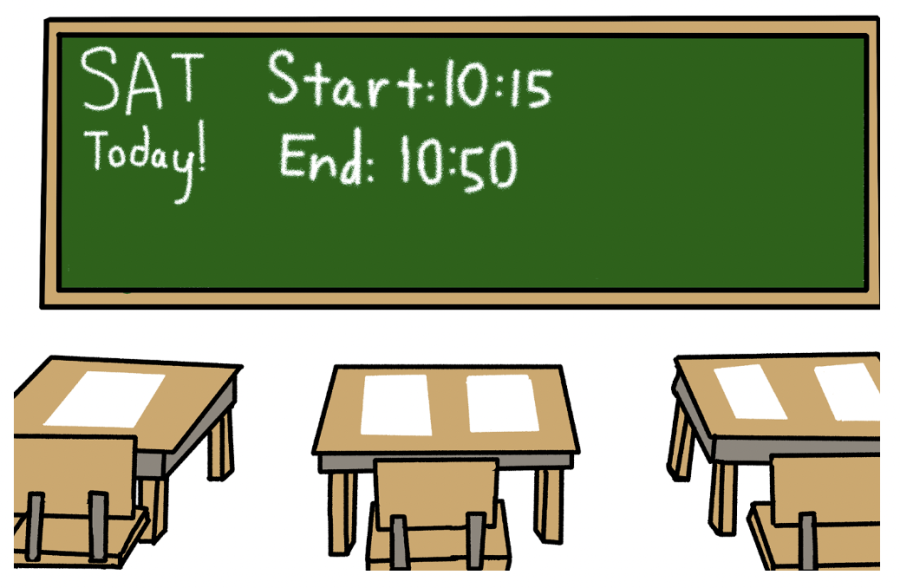 The College Board has been the looming threat of darkness, the evil villain squelching the dreams of young, aspiring high schoolers. College Board continuously makes promises to make the SAT more equitable, fair, and representative of the entirety of a student’s profile—yet they fail every time.

In January, the College Board announced a shift to a digital testing platform, expecting it to replace the paper test by 2024. This new change, meant to be an innovative fix to a dated system, fails to address the actual inequities that come with standardized testing.

Every so often, changes are made to the SAT, in hopes that the altered test questions will be more representative of students’ abilities. The implementation of a digital test, on the surface appears to be a novel decision, made after years of dedicated research, that will lead to a better test. But if you take a step back, you realize that no matter the format, digital or on paper, the test is just as unfair, inaccessible, and expensive as before. The College Board’s claim of advancement is just a lazy effort to get outspoken proponents of the SAT’s elimination to stop complaining.

The SAT is dated. Most of us remember talking to our parents about their experience with the SAT, and we very quickly realized that in 35 years, no major changes to the test have taken place. For a test that colleges are so heavily dependent on, and one that is regarded as a universal indicator of academic ability, it has failed to improve at any significant rate. It is the landline phone in a world of smartphones, a Delorean in a world of Teslas. A simple transition from paper to computer format won’t change that.

In addition, it is part of a bigger inequality issue. In general, college prep schools, tutors, and countless extracurricular activities make richer students more attractive to colleges. With the SAT, expensive classes and tutors teach kids how to “master the SAT ‘’ (the catchphrase of the notorious Princeton Review, one of the nation’s leading test prep companies) often despite their academic abilities.

A simple solution would be to eliminate the test. It would create space for students to find other interests and hobbies, not spending their time and money on studying and taking this strenuous and mentally taxing test. Proponents of the test claim that it allows for a constant way to compare different students, which is true, but a GPA does the same thing, only better. With varying teacher input and situations, grades can factor in a student’s personal life, learning type, and personality as well as their academic performance.

With this, students can have a more representative (and still comparable) set of “stats” for colleges to look at. Resulting from the pandemic, test-optional schools have taught us that the need for standardized testing is no longer necessary to the extent at which we previously believed. Many colleges claim to conduct a “holistic review” in regards to applications, meaning when reviewing applications, they take into account experiences and attributes as well as academic excellence. Something we might add, they should have started enforcing a while ago. With a holistic review, there is no longer a need for the SAT, especially if a student’s GPA is already factored.

Standardized testing, for years, has been under fire for its inability to test completely fairly. Colleges are dependent on the scores. Consequently, a large amount of pressure is placed on each student. Coming up with a new test is easier said than done, and a new test could create the same problems as we have today.

Eliminating it all together seems like the simplest solution. Unfortunately, eliminating the test would lose the College Board, and review companies like Princeton Review so much money; the likelihood of complete termination of the SAT is a somewhat outlandish idea. But whatever the College Board decides to do, it is undeniably essential that they are held accountable for their false promises.With each year, we hold high school students to higher standards, forcing them to be better and better. It is time that we pushed the SAT to do the same.