Overcoming Adversity Rolling into the Postseason 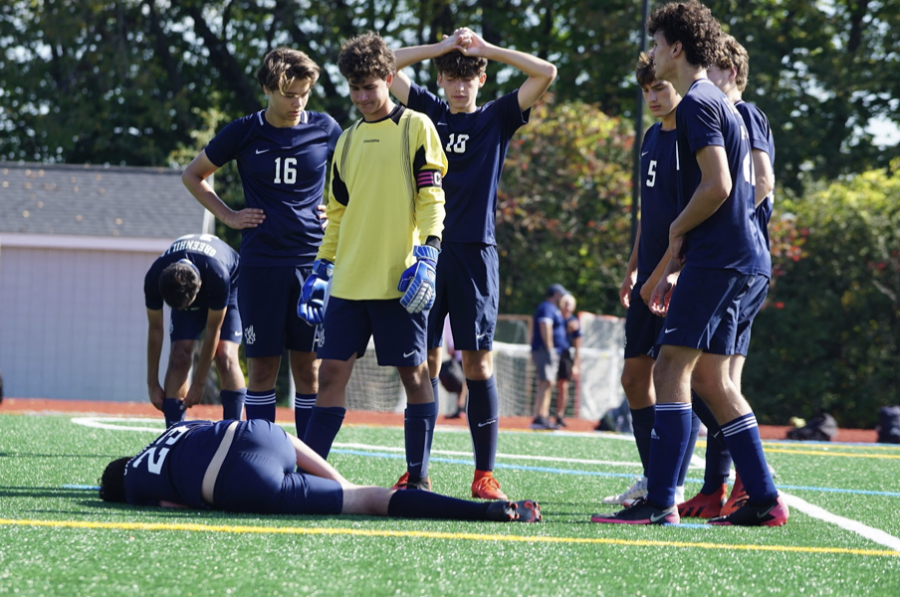 Rebuilding this season, the boys’ soccer team is on the upwards climb, showing noticeable growth. The team has a growing offensive push and is learning everyday despite injuries and other setbacks.

The boys’ soccer coach, Lucian Popescu, said, “There is definitely a significant difference in play from the beginning of the season.”

The team has been training since June, and the athletic director, Meg Seng, said that the team is getting stronger as the season goes on.

“The team has a tough schedule this year, up against D2 and D1 schools that can be twice the size of Greenhills,” Seng said. “They really have some of the toughest competition they can have, and are already in a tough division within the Catholic League.”

Although there is strong competition, the team has recently beaten the school’s rival, Father Gabriel Richard, in the last minute of a game.

Pranay Shah ‘23 said the team’s biggest accomplishment, and most interesting goal, was against St. Mary’s. The opposing goalkeeper let the ball slide under his foot, and Michael Zheng ‘24 was able to tap the ball in.

“I see that the team has definitely gotten better, although I am not a soccer pro by any means,” said Seng.

The team is also facing injuries and the positioning struggles, as well as the challenge of losing several players from last year.

Jay Vijan ‘23 said Ben Colis ‘21 and Mikias Tamrat ‘21 were a big part of the team last year, and losing them was a huge hurdle for the team to overcome.

In addition to losing players, the team has also faced injuries. Tom Lucas ‘23 got injured in a game against Detroit Country Day School, and is not expected to be back for 2 weeks. Lucas said he was running alongside a player from the other team, and when the player kicked the ball, the follow-through hit Lucas’ ankle.

“We had a lot of injuries at the start of the year, and were just getting things picked back up,” Lucas said. “This kind of messes up our hot streak.”

However, Lucas said the team will still be fine, and he plans to be back for playoffs.

Recently, Cale Piedmonte-Lang ’22 has also suffered a head injury. The goalie was diving for a ball when his legs got kicked out from under him by a player from the opposing team, causing him to land on his head.

After being rushed to the hospital, it is determined that Piedmonte-Lang’s injury is a major concussion.

Despite obstacles, the team has had many strengths and highlights this season.

Popescu mentioned Piedmonte-Lang as a standout player this season. Popescu said Piedmonte-Lang is someone who should be “highly recruited by colleges,” in addition to calling him “confident and consistent.”

Piedmonte-Lang contributes to the strong team defense, and Seng identifies goalkeeping as one of the team’s largest strengths. Piedmonte-Lang is said to be someone to take charge on the field, and Seng is proud of his senior leadership. The team has not given up many goals this year even while playing larger schools.

Other standout players include Vijan, and Piedmonte-Lang’s co-captain Nico Pasquariello ’22, said Shah. Vijan has been on Varsity all three years of his high school career, and his teammates speak highly of him. Shah said he is having a great season so far, and that he is an essential part of the team. Popescu said Pasquariello is “brave, and powerful at center back.”

Popescu said the rest of the work in the season has to be a team effort, with everyone “all in” to win some silverware. Popescu said he is optimistic for the team’s future, and hopeful heading into the postseason.

With varsity on their way to the postseason, Junior Varsity (JV) has reached the end of their season. Lucas Wentzloff ‘23 said that the team chemistry on JV this year is really nice, and everyone works well together. “The team gets really excited and loud before games,” Wentzloff said.

A tradition among JV players is to eat a Hungry Howies cookie before each game for good luck. Wentzloff said the season has been a good time so far, and they are looking forward to a strong finish.

Overall, the season has been one of growth for boys soccer. Lucas believes the rest of the season will be “better than ever before” and the team is excited to see where the postseason takes them.