A Season of Change and Success 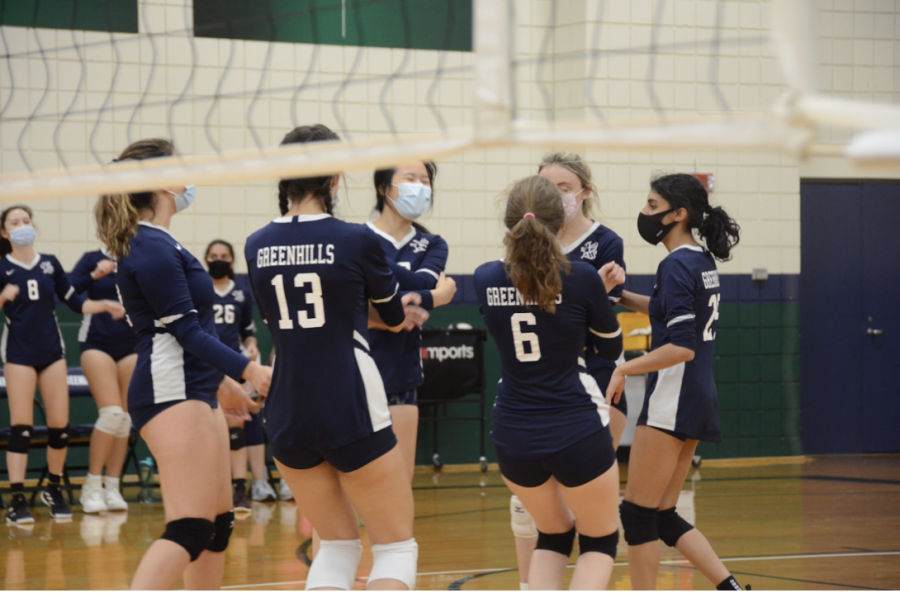 With 19 wins and 14 losses, the women’s volleyball team continues one of its best seasons in Greenhills’ history. The team, led by captains Maddie Rodgers ‘22 and Lana Kouatli ‘22 has bounced back from a season cut short due to COVID-19 and come out motivated and strong.

During the 2020-2021 season, the volleyball team was unable to practice until mid to late September due to the COVID-19 guidelines restricting any events indoors. Due to these restrictions, their season was significantly shorter than those of past years. Only playing ten matches and having a limited number of practices in their previous season, the team struggled to bond and perform to the best of their ability.

“The team was just not the same as other years. We were not even allowed to perform our traditional celebration after winning a point where we huddled up and congratulated each other,” said varsity player Alex Hummel ‘23.

The ten matches were solely dual matches — meaning the volleyball team was not able to participate in any quads and other tournaments. This removed a crucial part of the season as the tournaments and quads often contain highlights of their season.

“Despite the many hardships faced in the previous season, the girls were able to persevere and come out strong this season,” said varsity coach Tiffany Willard.

Coaching her twenty-first volleyball season, Willard believes that this team is among some of the best she has coached. “The way they mesh and play together is unique and special,” said Willard.

Due to the shortened season last year, the volleyball team has been motivated to work harder and make the most out of their season. They arrive to practices and matches energetic and ready to put their best effort into every drill and point.

“We want to take advantage of the great team we have and make sure that we do not end the season with any regrets,” said Kouatli.

Along with drills and scrimmages, the team trains to ensure every person contributes equally during matches and practices. Whether a team member is giving their all on the court or cheering for their teammates from the bench, every teammate is making an impact on the match.

At the beginning of the school year, Willard was hired as a member of the Greenhills faculty. This new addition allowed the volleyball players to practice directly after school instead of the traditional 6-8 p.m. practices, allowing the players to be more energetic and focused. This also meant that the varsity players practice alongside the junior varsity (JV) players, allowing the two teams to bond and inspiring them to work harder.

As of Oct. 21, the women’s volleyball team is 19-14 overall and 7-1 in the Catholic League. Their only loss in the Catholic League was in a match against Cardinal Mooney where they lost in 3 straight sets. Due to this loss, the team finished second in the Catholic League. Most teams would be affected mentally after such a loss, but this was not the case for the Gryphons. In the following match, the volleyball team competed in the Greenhills Invitational against Whitmore Lake and Mason Erie. Eager to bounce back, the team for victory and won in three straight sets against Whitmore Lake and in a close five setter against Mason Erie. “You learn more in a loss than you do in a win,” said Willard.